Magic mushrooms, truffles, peyote and other psychedelics have been used for centuries to induce strong psychological and spiritual experiences. New ways to use them are emerging: Could psychedelics be the caffeine or anti-depressant of the 21st century?

Most people drink tea or coffee before going to work in the morning. Some people, however, drop acid. Major news outlets throughout the world are reporting on the growing number of professionals taking tiny doses of LSD to give them a competitive edge at work. A trend that is often called “microdosing”. In a pioneering article by Rolling Stone magazine it was referred to as “The new hot ‘business trip’ taking Silicon Valley by storm”. Microdosing has since gained an increasing amount of attention from the media regarding its potential benefits, including coverage from influential news outlets such as the BBC News, The New York Times, The Wall Street Journal, and the Dutch NOS.

Microdosing involves taking very small (“micro”) doses of a psychedelic substance - usually around 1/10th of recreational dose a user would take to achieve a moderately strong psychedelic experience. The exact doses used by so-called microdosers differ between individuals and depend on personal preference regarding the desired effects. However, by definition the effects of a microdose should be sub-perceptual and should not produce any manner of hallucinogenic effects.

Based on user-reports, microdosing has been claimed to lead to improvements in creative performance, increased physical energy, improved ability to focus, and better relational skills. Moreover, microdosing has been proposed to have therapeutic value, as well. It is often reported to improve one’s mood and increase flexible behavior. It might therefore prove to be a useful tool in treating depression or other mental disorders that involve rigid cognitive or behavioral patterns (e.g. Obsessive-Compulsive Disorder).

However, despite the growing interest in microdosing over the last few years, there has been little scientific evidence to back up the user-reports from the microdosing community. Therefore, the question remains as to whether it really does work. It might very well be that the effects reported by microdosers can be reduced to placebo effects that are further strengthened by the increase in suggestibility brought about by psychedelic substances.

The current state of research on microdosing

Jim Fadiman, a pioneer researcher in the field of microdosing in the mid-60s has recently revealed the results of a 5 year long online self-report study with 418 volunteers. Participants were encouraged to take a microdose of LSD every 4 days for 10 cycles and to report on their experience using self-report measures. Most common among the reports obtained were experiences of “[an] increase in feelings of determination, alertness, and energy, as well as a strong decrease in feelings of depression”.

Although these results do sound enticing, one should approach them with caution. Studies based on self-reports are known to suffer from validity issues due to participants’ unreliable memories or willful distortion of their subjective experiences. Consequently, over the past few years the media has been calling out for controlled quantitative scientific studies to validate the reported effects of microdosing. Scientific validation of the positive effects of microdosing will open the way to subsequent clinical trials. This could ultimately provide us with the possibility to implement the use of microdoses in therapeutic settings.

How do Psychedelics affect the brain?

Despite the lack of controlled studies on microdosing, ongoing research using higher doses of psychedelic substances can shed some light on the mechanisms through which psychedelics produce their profound changes in consciousness. Classic hallucinogens are known to act as if they were serotonin (a naturally occurring neurotransmitter in the brain). Their primary site of action is believed to be a specific sub-type of serotonin receptors, namely the serotonin 2A receptors. One of the consequences of this increase in serotonergic activity brought about by psychedelics is thought to be a temporary decrease in activity in a network of brain areas called the Default Mode Network. This network of brain areas is thought to be involved in self-reflective thought processes, such as thinking about the future, ruminating about the past, or taking on the perspective of another person. Put differently, one could say that psychedelics have the effect of reducing inner dialogue.

Moreover, psychedelics have been shown to increase neural connectivity throughout the brain (see Figure 1). That is, while under the influence of psychedelics there is an increase in interconnectivity between parts of the brain that do not usually communicate with each other. This in turn allows for more flexible communication between these brain areas. 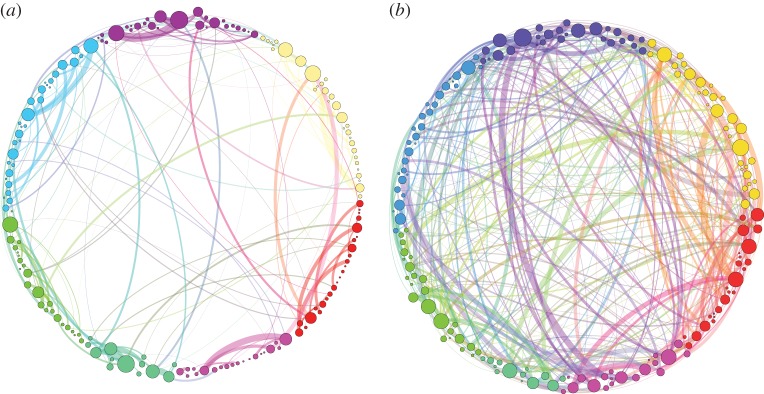 Figure 1. Comparison of resting state brain connectivity between the brain under the influence of psilocybin (b), and an unintoxicated control condition (a).

The future of microdosing research

Arguably, the effects of psychedelic substances could be beneficial in situations where there is need for mental flexibility, or when one needs to break through rigid patterns of thought. For instance, psychedelics could improve creative performance by inducing a state of unconstrained thought that allows for increased novel idea generation. Furthermore, individuals suffering from depression might benefit from treatment with psychedelics due to its effects on mood, and possible reductions in self-reflective thought and rumination.

To this end, we are currently investigating the effect of microdosing on cognitive function at the University of Leiden within the labs of Prof. Bernhard Hommel and Prof. Lorenza Colzato, with the support of the Psychedelic Society of the Netherlands. We hope our research will shed further light on the issue and potentially lead us on our way to discovering a new technique for cognitive enhancement as well as new types of therapeutic interventions to help individuals who suffer from rigid thought patterns or behavior such as individuals with depression, obsessive compulsive disorder or addiction.

Captain Beefheart The Spotlight Kid <a href=https://mp3bump.info/carly-simon-anticipation.html>Carly Simon Anticipation</a> She Him Volume One

if i can help, with anything...just call

User reports collected over the years bij Jim Fadiman indicate that microdosing shows great promise, not only as a life hack or personality hack, but also for those who suffer from f.i. ADHD and depression. Glad to see that it's being researched here, especially because microdosing can be done legally in the Netherlands.

I personally microdosed on truffles, which are legal here in the Netherlands, and had very good results at the beginning. However, psychedelics seem to promote divergent thinking and this had started to disrupt the good results. At some point, I had to stop microdosing because I was constantly having new ideas but I struggled with finishing my projects. Now, I do it only from time to time. I wonder whether there is any study that tracked people who microdosed for more than 3 months and what their experience was.

This is very interesting! Looking forward to reading more on this topic! Keep up the good work